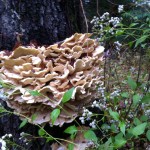 This summer I ate bugs, twice. Once at Glynwood, where sautéed cicadas dipped in honey were offered as an amuse bouche at a pig roast, and another time at camp. There, during the annual end-of-summer fair, I consumed a grasshopper that had been fried in an enormous wok set upon a campfire. I ordered mine just in the nick of time, moments before a flame slipped into the pan, igniting the oil in a huge pyrotechnic blaze that leapt 6 feet into the air and incinerated the remaining creatures. It added a certain thrill to the whole bug-eating experience.

Which helped. Because it turns out that eating bugs is not all that big a deal anymore. For one thing, it is now tiresomely hip, in the Brooklyn sense. It is also macho, thanks to people like Bear Grylls and Anthony Bourdain, both of whom consume insects with a kind of seventh-grader-on-a-dare relish on TV. And it is politically correct: The UN Food and Agriculture Organization issued a report last May urging an increased consumption of bugs for a variety of ecological and health reasons.

In other words, my bug consumption could be taken as nothing more than evidence that I am willing to hop on whatever trendy culinary bandwagon happens to be rolling by at the moment.

But I’ve also long been fascinated by the whole notion of what we Americans consider edible and what we find inedible—and why we draw the lines where we do. I’ve noticed, for example, that people who are otherwise extraordinarily open-minded about cultural differences can exhibit a surprisingly flagrant sense of superiority when it comes to food (myself included).

Without even realizing it, we may look upon foreigners who eat bugs, sea slugs, horse meat, or monkey brains as not only creepy, but also uncivilized. We assume these people eat such things because they don’t know any better, or have no choice, like wild animals. Given the wherewithal, those barbarians would surely eat good food, like we do.

But that’s not necessarily true. A lovely English writer named Fuchsia Dunlop once made a fine English dinner of roast beef and Yorkshire pudding for a group of Sichuan friends she had met while studying in China. They were flabbergasted: This was considered fancy in Britain? It was so simple, so dull. Where were all the different textures and tidbits one finds in a Chinese feast? Where were the gelatinous bits, the runny parts, the pieces of cartilage demanding prolonged chewing? They found her dinner faintly hilarious—and her pride in it slightly pitiable.

I was thinking about Fuchsia and bug-eating the other day, because one of the dishes I made for the Garrison School Forest fundraiser broke a somewhat gentler taboo—against eating cute animals. On the menu, alongside woods-y venison meatballs and forest-y wild-mushroom tart, I offered pulled rabbit sliders. This despite knowing full well from many years’ experience that most people feel squeamish about eating rabbit.

I wish they wouldn’t. For one thing, rabbit is extraordinarily delicious and quite lean. For another, it seems unfair to eat only those animals that aren’t quite adorable enough to be spared. I mean, it’s admirable to refuse to eat meat altogether, and prudent to avoid endangered or rare animals—or actual pets—but to decline to eat certain meat only because it’s cute just seems lookist to me. Arbitrarily so.

Fortunately, I didn’t have to lay out my argument on Saturday night. Deliciousness makes its own case, whether the food in question was once a creep or a cutie. Or (since rabbits are rodents, after all) perhaps a little bit of both. After one bite, none of that mattered.